The first four yearly lists each had 50 selections. Since 2006, 25 recordings have been selected annually. As of 2019, a total of 550 recordings have been preserved in the Registry. Each calendar year, public nominations are accepted for inclusion in that year's list of selections, which are announced the following spring.[1] (bold and bold italic not in original) 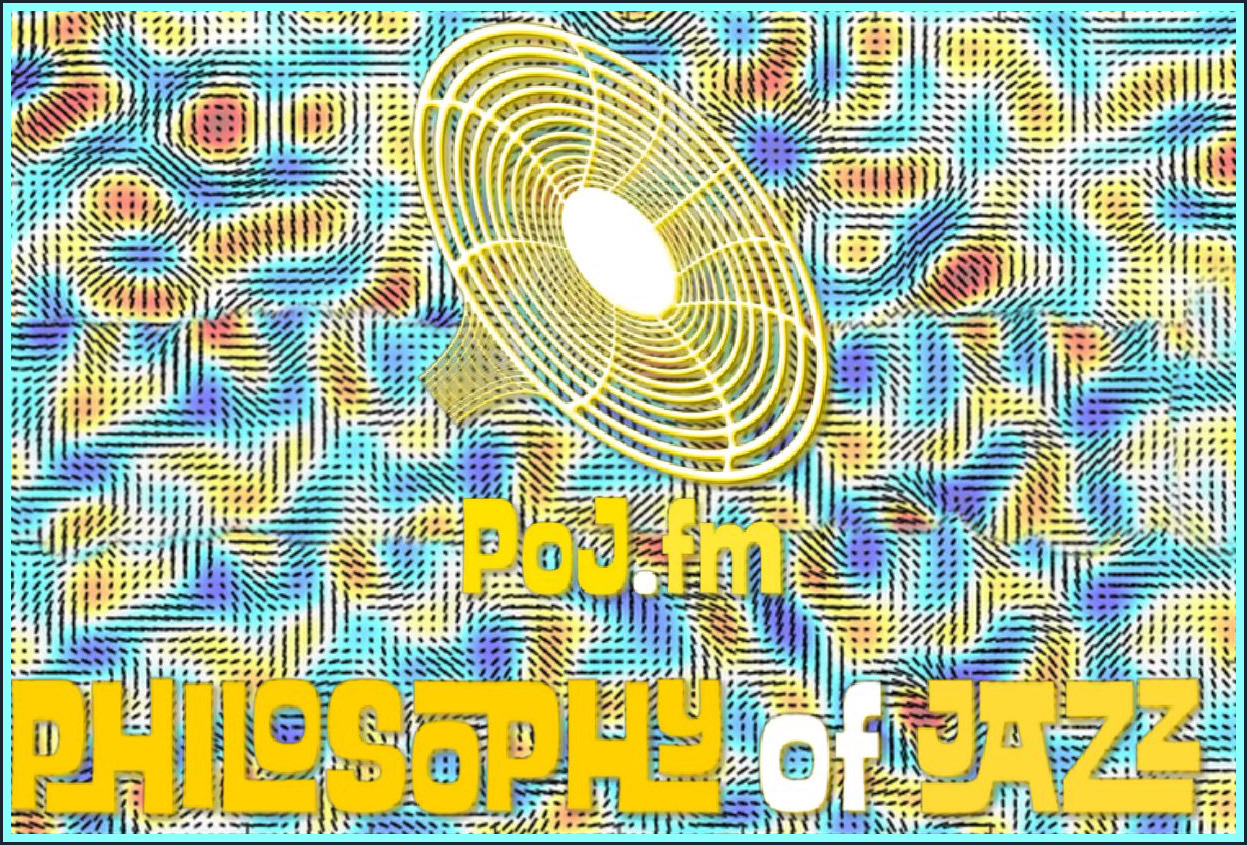 What is the number and percentage of the 550 total of the National Recording Registry of the United States 🇺🇸 as of 2019 that are ragtime or jazz or jazz vocals or Latin jazz?

The answer is that there are 65 entries listed below chosen by the National Recording Registry, which is 11.818181818%, or roughly 12% of the total number.

If we limit ourselves to just the top 25 ranked songs four are jazz tunes giving a percentage of 16% (4/25). The four with its ranking given first are:

It is true that it is a stretch to include Bobby Darin's "Mack the Knife" under jazz, but the history of jazz musicians who recorded the song perhaps reveals that it is a song that draws a jazz attention. Wikipedia: "List of 1920s jazz standards" under the year 1928 informs us that “The first jazz recording of the song ("Mack the Knife") was made by Sidney Bechet in 1954 under the title "La Complainte de Mackie". Louis Armstrong's 1955 version established the song's popularity in the jazz world.” Dick Hyman, 60 year career American jazz pianist, recorded an instrumental version in 1955. Frank Sinatra recorded the song with Quincy Jones on his vocal jazz album "L.A. Is My Lady." Ella Fitzgerald made a famous live recording in 1960 (released on her vocal jazz album "Ella in Berlin: Mack the Knife") where after forgetting the lyrics early on she improvised new lyrics in a performance that earned her a Grammy Award. Other notable jazz vocalists who recorded the song are Tony Bennett, Bing Crosby, and Michael Bublé. Jazz saxophonist Sonny Rollins recorded an instrumental version on Saxophone Collossus entitled "Moritat" in 1956.

NOTE: Click on the light blue hyperlinks for more information about the musician/entity, composition/item, or the historical year in the United States of America 🇺🇸. 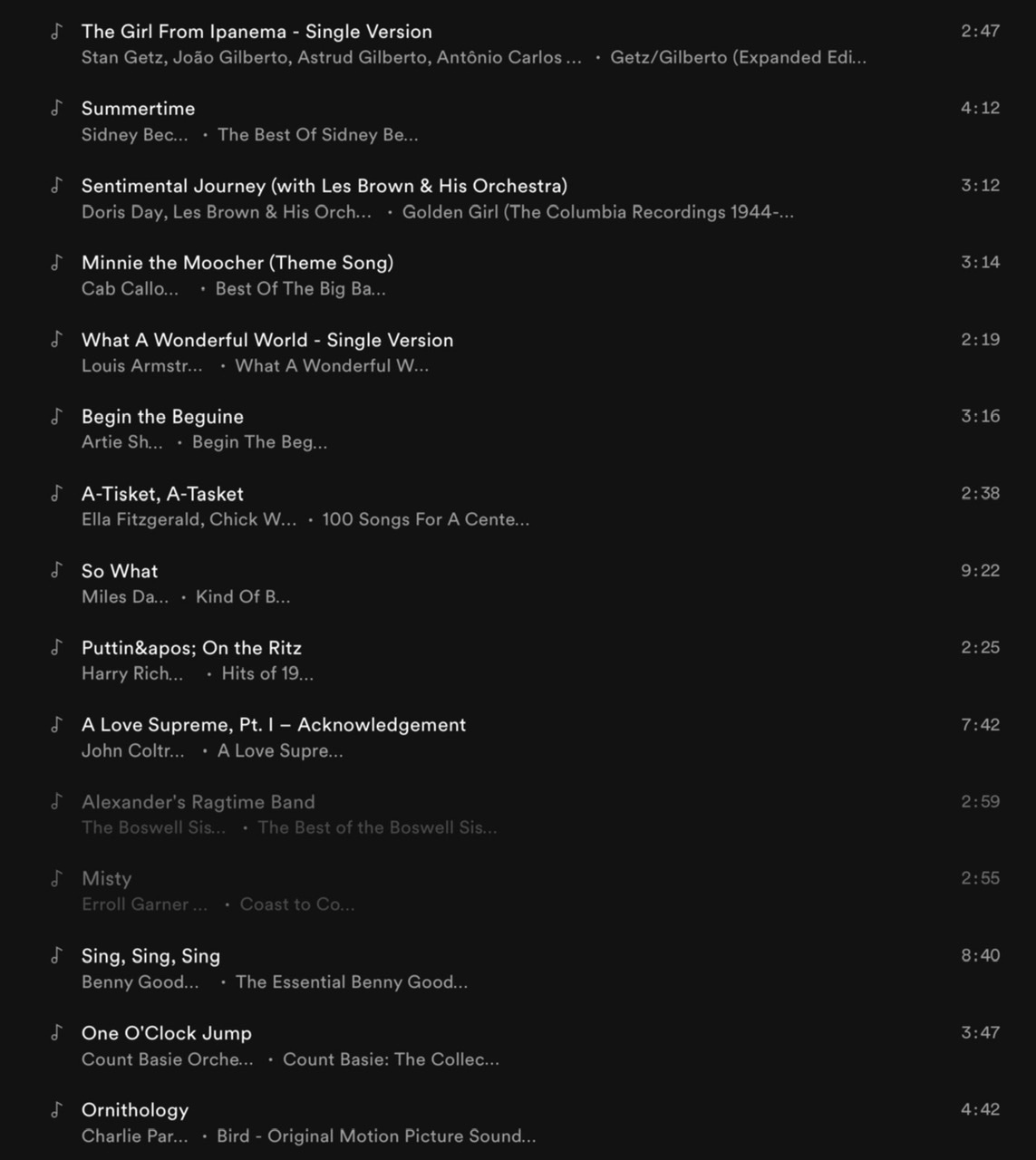 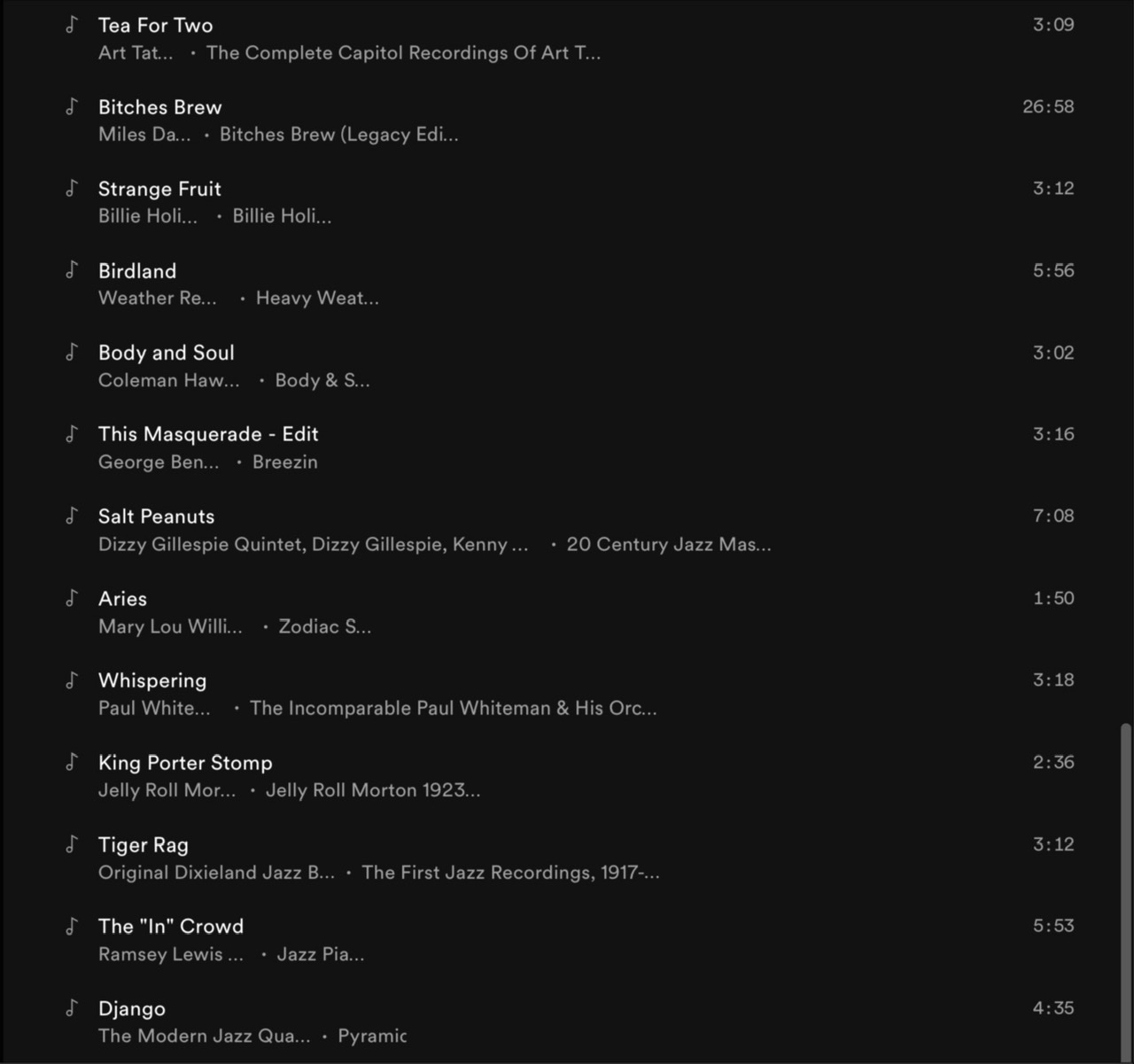 In 2001, RIAA created the (Top 365) "Songs of the Century" list to promote better understanding of America's musical heritage. As described by RIAA itself:

“The Recording Industry Association of America® (RIAA) is the trade organization that supports and promotes the creative and financial vitality of the major music companies. Its members comprise the most vibrant record industry in the world, investing in great artists to help them reach their potential and connect to their fans. Nearly 85% of all legitimate recorded music produced and sold in the United States is created, manufactured or distributed by RIAA members.”

As with any ranking system, it depends upon numerous factors, many are subjective (e.g., "Who played more beautifully?") and some questions are meaningless (e.g., "Who is better Miles Davis or John Coltrane?") with no way to provide an answer until actual criteria for judging and evaluating are proposed.

Also, people unfamiliar with entire musical genres will leave out any stellar examples from those areas and this is almost an unavoidable problem, as likely happened in the RIAA list as criticized by Bob George:

“Bob George, director of the Archive of Contemporary Music, a nonprofit popular-music library in New York, said more recent pop-music genres such as electronic dance music, punk rock, and rap were given short shrift. "These are songs a lot of people would recognize if they were white, middle-class and old," George said. "It's a great list for people who go to baseball games."[2] (bold not in original)

There are no songs from the jazz genre included in any of the 500. The closest any song gets is a composition from 18 year old pianist/composer Rod Argent and his number 297 hit "She's Not There" by The Zombies because it is said that Argent unconsciously included influences from jazz trumpeter Miles Davis (1926-1991).

Someone, or a committee, at Ranker.com first wrote up or edited a (possibly prior) list. Regardless of the origins of the original list it could come from only two realistic scenarios: human's or computers. The computers are programmed by humans. Therefore any prejudgment human software or hardware developer/programmers have will also end up embedding into the contents of these lists, especially given something so subjective as music. See next point about exposure.

There are zero humans who have heard all songs. Not any size collective group of humans either have ever heard all songs. Even if every human alive now could vote on a list of best songs none of them have heard all songs. Not the songs and music before recording existed, nor any unrecorded music prior to that human's birth. So, the judges, or computer developer/programmers are ignorant of a lot of the music over which they are purporting to judge the best. Being ignorant means that the evaluators could easily miss some unknown great song, since they are unaware and unexposed to these songs as to how great they are or are not.

Ignorant of other culture's music.

Ignorant of even all of one's own culture's music.

Ignorant of old songs you have not gotten around to hearing.

Ignorant even of current music because there is so much of it.

➢ Can we get around these objections by just claiming to rank the most famous, well known, and already established and heard and familiar to millions of people songs and then just have people rank those so we are limiting the domain of referents to only well established recorded music found in the last century? Will this help to resolve these problems of ignorance?

This does seem like progress in clarifying exactly what the evaluators of American music are ranking. They are in effect ranking the songs that many people in mostly North America, probably 95% are Americans 🇺🇸, of which they are familiar.

Domain reduction size (or having fewer members in the relevant class) is good because there are now fewer actual objects that need to be considered. Nevertheless, similar problems remain regarding the evaluators. Each evaluator is incompetent to correctly judge the best songs because of his or her ignorance of other candidates for inclusion and where they rank in relationship to each other. Any one person's judgment is bound to be wrong relative to some ideal. Any one person's top ten songs will not be identical generally speaking with anyone else because of the very factors we have been considering influencing and skewing their evaluations and rankings. However, over time and with multiple evaluators, it is hoped that the "cream shall rise to the top" and it is at least discovered the majority's opinion about where any particular song should rank in relationship to the others.

Aggregate voting may provide insight into how individual songs are ranked by large groups of evaluators. It may seem that these ranking lists compiled by many will achieve a superior result, i.e., increased accuracy of correctness, by virtue of the phenomena known as "wisdom of the crowd." Wisdom of the crowd effective overall responses works best when there is already an established 'correct' answer such as things involving quantitative measurements and numerical quantities. However, notice in the case of ranking songs for 'greatness' there is no objectively 'correct' answer because these sorts of evaluations carry so much subjectivity and possible multiple cognitive biases.

Another problem that aggregate voting does not immediately resolve is failure of genre inclusion from individual's ignorance and lack of exposure to song material and choices. How many non-United Kingdom music fans know how wildly successful the songs are of Robbie Williams of whom it is said was “often regarded as the greatest and most popular British singer of the past decade.”? (Click on any green font to see the source of this quotation at Wikiquote).

It is likely that hip hop or country music fans have not listened to much jazz and vice-versa. Still, each is aware that the other fan's music exists; they just are not interested in it at this time. This results however in hip hop evaluators never including any jazz songs in the list of greatest songs of all time, and vice-versa, too!

➢ Are there any great jazz songs that can at least be considered candidates for possible inclusion in the top 500 songs of all time?

Most assuredly there are many. Here's an unranked list.