Ontdef8. What is a bicycle?

Bicycles are defined at Dictionary.com as “a vehicle with two wheels in tandem, usually propelled by pedals connected to the rear wheel by a chain, and having handlebars for steering and a saddlelike seat.”

Wikipedia gives this characterization of a bicycle as: “a human-powered, pedal-driven, single-track vehicle, having two wheels attached to a frame, one behind the other.”

Of course, it would still be a bicycle if it is ridden by a chimpanzee so it need not be human powered. This defect in the definition can be remedied by switching from including human powered and changing this to manually powered using muscles. 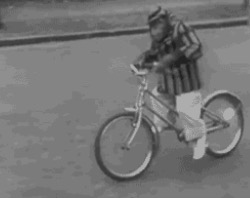 To see chimpanzee or dog clearly riding a bicycle click on its picture then hit back arrow to return. 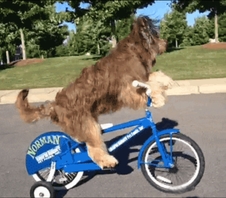 Another aspect missing from the above definitions is that the rider needs to balance on the vehicle while riding it and that this is assisted by the gyroscopic effects one gets from rapidly spinning wheels.

These definitions include that the pedals are connected to the rear wheel by a chain.

➢ Would you still have a bicycle if the peddling mechanism were front wheel drive, rather than linking to the rear wheel assembly?

➢ Would you still have a bicycle if it did not have handlebars?

Yes, because bicycles can be steered by means other than handlebars.

“To transfer power from all pedals to the rear wheel requires a drive train.”[1]

➢ Would you still have a bicycle if the propulsion system was replaced by something other than a chain that serves a chain's functions?

Yes, because the propulsion method needs to be manually propelled, but it need not only be by a chain mechanism. It cannot use a motor because then it would be a motorcycle or a motorized bicycle.

If it is functionally equivalent to a chain then isn't it then functionally a chain? No, not if it is a gear system that replaces a chain system as found at chainless bicycles.

➢ How well does the standard definition of bicycle hold up to counter-example challenges?

Let us consider a wide range of vehicles and ask whether the item should or should not be classified as a bicycle.

Several criteria stand out as obvious for distinguishing bicycles from non-bicycles.

By way of clarification here are examples of vehicles with proper classifications as bicycles, or other vehicle types. Generally speaking, the riding universe is comfortable with calling almost any vehicle that is bicycle-like a bike.

Unicycles: Only one wheel on ground. 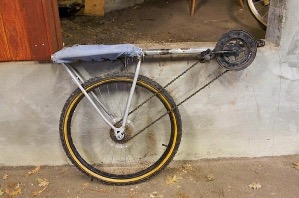 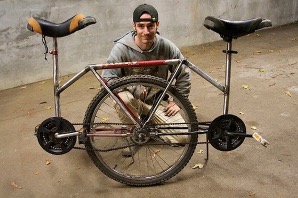 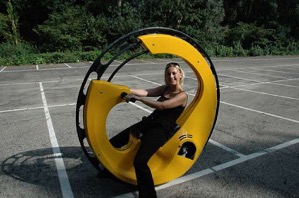 The third yellow vehicle from left is called a one-wheeled scooter. 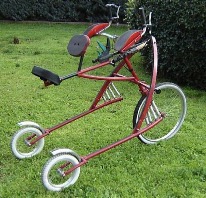 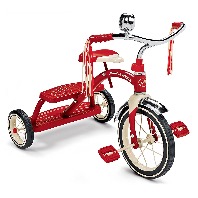 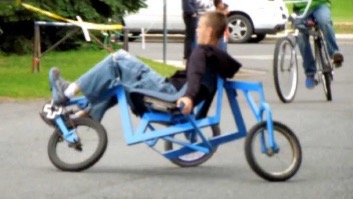 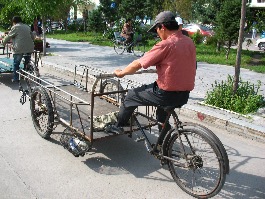 A scooter is not a bicycle because it is either “a light two-wheeled open motor vehicle on which the driver sits over an enclosed engine with legs together and feet resting on a floorboard, or a non-motorized vehicle typically ridden as a recreation, consisting of a footboard mounted on two wheels and a long steering handle, propelled by resting one foot on the footboard and pushing the other against the ground.”[2]

Notice that what primarily distinguishes scooters from all other vehicles is that the driver's feet are on a footboard and not used for propulsion using any mechanical mechanism, i.e., not pedaling with mechanical advantage.

The first two (1) and (2) are indeed pictures of bicycles because each only has two wheels in contact with the ground aligned in tandem and being driven by a peddling mechanism. Number (3) pictures a non-bicycle because it has more than two wheels contacting the ground not aligned in tandem. Or, you could say it is five bicycles welded together in a circle. It is complicated because there are nine seats and a riders front wheel is the rear wheel of the person ahead. There are ten wheels so there are five complete bicycles, but there would only then be five seats. The picture on the right (4) also does not portray a bicycle because it has no peddling mechanism providing mechanical advantage to the rider. It is in effect a sling scooter.

The category name for number (12) vehicle would not likely be tricycle even though it has three wheels because that name is reserved for a triangle wheel configuration, two wheels in back with one in front or vice-versa.

Presumably, even if a peddled two wheeled vehicle did not have the wheels lined up in tandem the vehicle would still be a bicycle, as in the two concept bikes pictured below where the two wheels are parallel each other or not inline. It's not a scooter because it is peddled for power. It is a bicycle because it satisfies all other components of the standard definition. 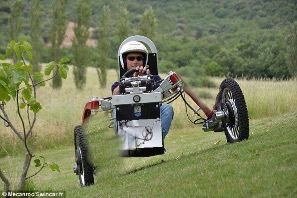 Bicycles then could also have the two wheels be parallel but not inline, as in the concept bike pictured below. 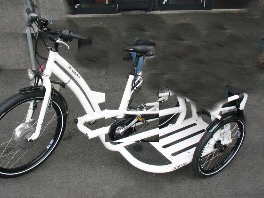 The non-tandem bicycle pictured above would not be a single track vehicle, contrary to Wikipedia's characterization of a bicycle. This defect in the definition can be easily remedied by just claiming that bicycles are usually, or most typically, single track vehicles.

➢ Does a bicycle need to be peddled?

Here is what appears to be a pedalless vehicle propelled by wind power using a sail. 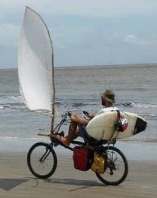