Ontimpr4. On mistakes and improvisation 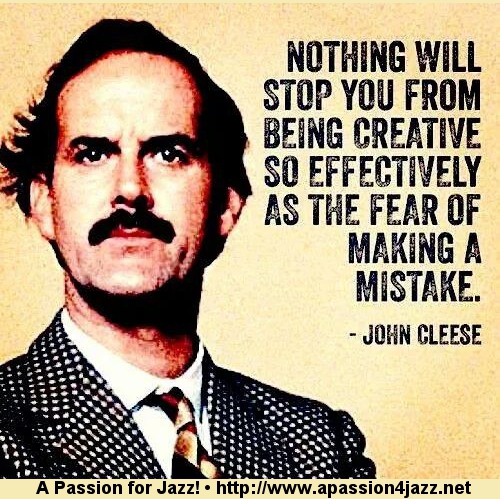 Reasons that mistakes are impossible during improvisations[edit]

The etymology of the word “mistake” according to the American Heritage Dictionary, 4th edition, 2009 is that the word comes from several sources. From Middle English the word “mistaken” means to misunderstand. From Old Norse “mistaka” means “to take in error.” In Indo-European roots the prefix “mis-” means “wrongly” (related to “mei”) and “taka” means “to take” so a mistake happens when one wrongly takes something (typically in comprehension).

The definition of a mistake is to be in error relative to an action, calculation, opinion, or judgment caused by poor reasoning, carelessness, or insufficient knowledge, etc. A mistake can be the result of a misunderstanding or a misconception. To wrongly understand, interpret, or evaluate something produces a mistake.

There are at least two basic types of mistakes that can and do occur in jazz improvisations: execution mistakes and interpretation mistakes.

An execution mistake directly relates to performance skills. For example, when a performer intends to play a specific note, but actually plays a different note, then this is a flaw in performance execution. A second way an execution mistake can occur is to flub a note and produce a flawed sound by honking, coughing, not finishing, splatting, etc.

➢ An execution mistake occurs when a performer:

3. Lacks interaction and fails to dialogue with accompaniment.

4. Plays with a lack of confidence.

➢ An interpretation mistake concerns creative development and can occur in numerous ways such as when a performer:

1. Makes poor decisions.
2. Plays schmaltzy when one should not.
3. Gets lost during the performance.
4. Plays too many cliches.
5. Does not relate the improvisation thematically to the tune being played.
6. Overly repetitious performance.

7. Plays an improvisation with an inappropriate time feel and/or rhythm.

The reason why these interpretation mistakes count as mistakes is because each satisfies the definition of a mistake. As was seen in the definition of mistake as an error in judgment caused by insufficient knowledge or reasoning, a jazz improviser can lack sufficient or appropriate knowledge about how to play a particular song or reason poorly about the song’s structure and how it relates to his or her improvisation. Beginning musicians make these kinds of errors and mistakes all of the time.

What should one say about a beginner’s weak and impoverished improvisation other than the person lacks knowledge of the right chord changes to play or some other flaw in how the person proceeds in producing a musical event.

Even professional jazz musicians can be accused of having made mistakes of interpretation during a non-improvised performance. Thelonious Monk, who composed the song, often accused Miles Davis of not playing the bridge properly for one of his tunes. Since Monk wrote the song he has a point. On the other hand, Miles may just have been producing an alternative version of the tune and in the history of jazz oftentimes a famous soloist’s musical production has been adopted by future players as a good way to play that particular song.

Since one can make mistakes relating to knowledge of a song’s structure during the non-improvised performance, then if one bases one’s improvisation on the mistaken knowledge regarding the song’s structure, then this would count as an additional error relative to that musical structure.