What is the Philosophy behind JazzPhi?

Philosophy is currently in a bind; it seems that it has been maligned and superseded by science. The great philosophical questions that have stimulated people for millennia – free will, truth, metaphysics, knowledge, etc.—are now supposedly scientific questions, for scientists to answer. Perhaps this marginalisation of philosophy, at least in part, can be owed in part to the presentation of philosophy.[1] Unless one is already predisposed positively towards philosophy, the usual ways in which one consumes philosophy can be seen as dull—wading through a book, or sitting in a half-empty lecture theatre can be difficult experiences if one is lacking the pre-requisite enthusiasm. Jazz-Philosophy Fusion (or JazzPhi) seeks to remedy this and breathe new life into philosophical dissemination by combining the best of jazz with the best of philosophy. By overlaying philosophical lyrics over improvisations inspired by some of the great names of Jazz – Dexter Gordon, Zoot Sims, Sonny Rollins and others—JazzPhi hopes to bring philosophy to an audience that otherwise might not have engaged with it otherwise.

Why fuse Jazz and Philosophy? [edit]

There are a number of reasons to choose jazz to combine with philosophy; though the best reason is they already have lots in common. Both are very easy to recognise, but also very difficult to define properly[2]—anyone who knows anything about Jazz or Philosophy can spot it whenever it appears, but if pressed to explain why, they will run into difficulties. Also, both philosophy and jazz are equally capable of prompting strong emotional responses; there are devout lovers and zealous haters of both jazz and philosophy alike. Both of these suggest there is some kind of synergy between the two, and thus that philosophy can learn, from jazz, how to draw people in, and how to make them care about the ideas put forwards in the songs. 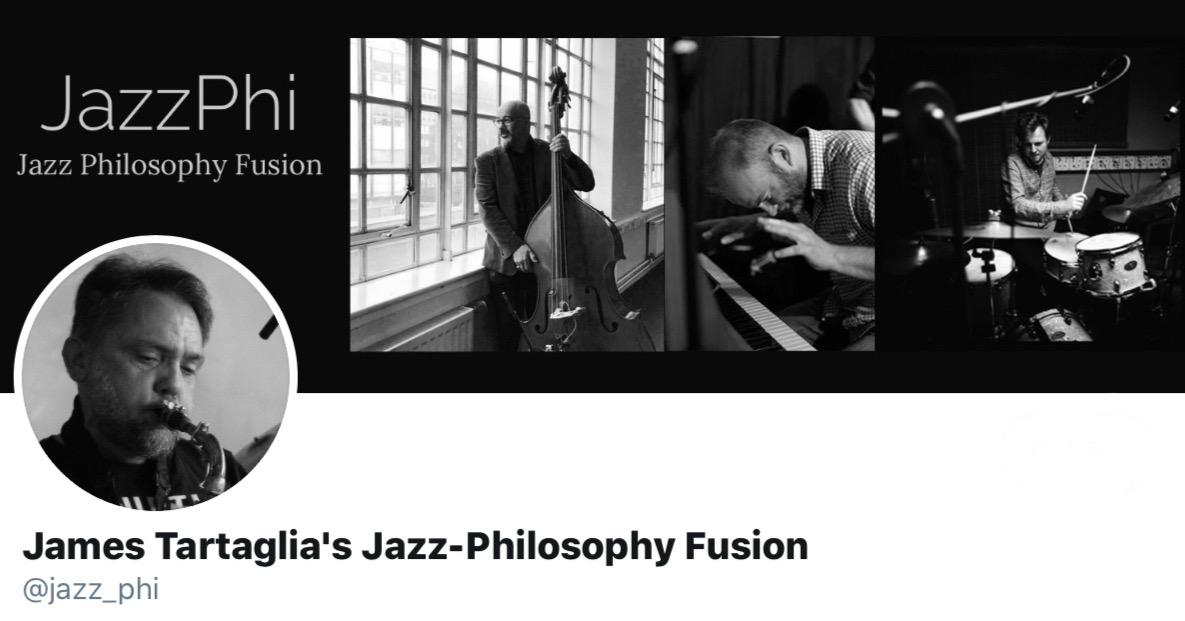 Lyrics to entertain people about philosophy are necessarily simplified and Philosophy relies on complex reasoning, dialogic argument and nuance, thus JazzPhi lacks the characteristics necessary to doing philosophy well. Moreover, if complexity was introduced to the lyrics, then the songs would likely lose their entertaining nature, thus undermining the central argument behind JazzPhi—getting people involved with philosophy via entertainment.

Response to Objections against JazzPhi[edit]

JazzPhi songs are not intended to be a replacement for traditional methods of doing philosophy. Rather, they are produced to pique one’s interest in a topic, which the listener can then explore with the requisite complexity by engaging with the philosophical canon at a later time. This response though, as with the objection above, seems to misattribute the intellectual labour frequently associated with doing philosophy, i.e., reading of texts, attending lectures, etc., as the essential core of philosophy. This, in fact, does not seem to be the case. Rather, it seems that the essential core of philosophy is critical engagement with a notion, to which texts, lectures and argumentation only act as an aid. For example, consider the young child staring at the trees and wondering whether they appear to their friends as the same color as they perceive them to be—one would be mistaken if they were to deny that the child was, at this moment, doing philosophy. It seems to be that the child is undoubtedly wrestling with appearance versus reality problems such as those considered by John Locke in his Essay Concerning Human Understanding and there seems no good grounds to assert that Locke was doing philosophy, but the child is not.[3]

This is not to deny that engagement with the philosophical canon is not of value—indeed, it is valuable to solidify ones thinking—but rather that such engagement is done to help one’s thought along, or to put it in a different way, to supply the philosopher with ideas on which they can reflect. As such, it seems erroneous to suggest that JazzPhi does not perform this same function, even with the charges of simplification intact. The ideas put forward in the songs, are the raw materials on which one can reflect, and it is this reflection—not the reading of texts, etc., in and of itself—that constitutes doing philosophy.

Where can one listen to Jazzphi? [edit] 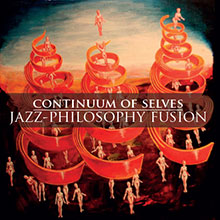 OVERVIEW: “Jazz-Philosophy Fusion is an unprecedented combination of jazz music and philosophical ideas. By supplementing a conventional jazz group with a singer and actress, classic philosophical themes are explored, providing a new layer of conceptual significance to the music, a new resource for improvising artists, and a vivid way of expressing philosophical ideas which acknowledges that they are not always of simply 'academic' interest to us.

James Tartaglia is Senior Lecturer in Philosophy at Keele University publishing in metaphysics and the philosophy of mind. His latest book is Philosophy in a Meaningless Life: A System of Nihilism, Consciousness and Reality (Bloomsbury 2016).

Jazz-Philosophy Fusion is designed to express the emotional significance of philosophical ideas, and thereby provide new inspiration for jazz music. These concepts have been previously presented on three prior albums: "A Free Jazz Treatise" (2002), "Dark Metaphysic" (2008), and "Kooky Steps" (2014). Tartaglia's latest album by the band Continuum of Selves titled "Jazz-Philosophy Fusion" (2016) is a full-scale, dedicated work. This talk was given at a TEDx event using the TED conference format although independently organized by a local community. Learn more at http://ted.com/tedx .”


“ABSTRACT: In this paper I describe and provide a justification for the fusion of jazz music and philosophy which I have developed; the justification is provided from the perspectives of both jazz and philosophy. I discuss two of my compositions, based on philosophical ideas presented by Schopenhauer and Derek Parfit respectively; links to sound files are provided. The justification emerging from this discussion is that philosophy produces ‘non-argumentative effects’ which provide suitable material for artistic expression and exploration. These effects – which are often emotional – are under-recognised in philosophy, but they do important philosophical work in demarcating the kinds of truths we want to discover, and in sustaining our search for them. Jazz-Philosophy Fusion can help to increase metaphilosophical self-consciousness about these effects, while also helping to counteract any undue persuasive force they may achieve. Jazz is a particularly suitable medium because it has independently developed a concern with philosophical ideas; because of strong parallels between jazz and philosophy which explain their mutual openness to fusions, and because improvisation very effectively facilitates the direct audience engagement essential to inducing these effects.” (bold and bold italic not in original)


"In this paper, I will reflect philosophically on the Jazz-Philosophy Fusion which I have developed. My interest in this particular fusion is explained by the fact that I was a jazz musician long before I became an academic philosopher. My career in philosophy had nothing to do with music until very recently, but nevertheless I recorded a string of jazz albums between 2002 and 2014 which experimented with the idea of adding some philosophy into the musical mix. The culmination of these experiments is my 2016 album Jazz-Philosophy Fusion with the seven-piece band Continuum of Selves." (bold not in orignal)

"The Sound of Philosophy" by Professor James Tartaglia


"The Sound of Philosophy": James Tartaglia asks whether philosophy and music should intersect.

Imagine you are seated in a lecture theatre, patiently waiting to hear some philosophy. The philosopher you have come to see then takes the stage and starts to sing: a song about the very topic you were expecting them to talk about. What you were expecting from your next sixty minutes was the usual presentation: namely a long build-up to situate you within the philosophical debate in question; the occasional (more or less) humorous aside to punctuate proceedings; lots of tentative reports of what the philosopher ‘wants to say’ (the nervous tic of the profession); and then some original claims, more often than not saved up until near the end. Then would come the round of questions –which some members of the audience will have been mentally rehearsing throughout the talk, designed as much to demonstrate the questioner’s own philosophical prowess as to elicit an illuminating answer, perhaps by catching the speaker out. This particular philosopher, however, has defied all these expectations by singing. Would you be disappointed and immediately leave? I doubt it. You would certainly be surprised, and might well regard this spectacle as ludicrous beyond belief; but a morbid sense of curiosity would keep you in your seat. But then, suppose the philosopher turned out to be a really good singer, with a really good song which had philosophically illuminating lyrics directly relevant to the issues. Further suppose he or she was accompanied by a first-rate band. Then you might be rather pleased at this turn of events. So delighted, in fact, that you found yourself talking about it for years to come."(bold not in original)